A major hurricane is heading to Florida this weekend after devastating the Virgin Islands, Puerto Rico, and islands further east.  This comes after another major hurricane, Harvey, flooded and destroyed the coastal Texas cities - Rockport, Houston, Beaumont and others.


Following the tragedy in Texas, a visiting University of Tampa professor posted on social media that Texans deserved Hurricane Harvey because of their support for President Donald Trump in the 2016 election.  Texas struck back on social media - Don't Mess With Texas!  The professor was fired.

Ken Storey does not speak on behalf of the state of Florida.  He does not represent us in any way shape or form.  Storey was also asked if his political statement also was true for Floridians who voted for Trump.  “Yep, those who voted for him here deserve it as well.”

Now, residents in Florida are facing that fate as well and it is starting in south Florida and heading north - Hurricane Irma.  At last report, Irma was wider than the state of Florida and was a strong Category 4 hurricane.  She was a very strong Category 5 while in the Atlantic, destroying those small islands.  The thing about hurricanes is, they don't know who voted for whom.  They destroy and cause havoc regardless of race, religion, political views...you get the idea.

A few Texans now think this hurricane, with Florida as its target, is now "ok" because of Storey's statements.  And they are voicing their approval on social media, namely Facebook.  The shocker, to me at least, is the page is administered by law enforcement officers in Texas - the Texas Sheriff's Deputies!  https://www.facebook.com/texassheriffsdeputies

The admins posted a MEME on their Facebook page 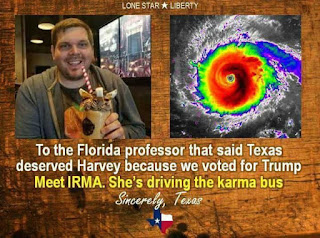 While the image itself is rather harmless, the admins responded with "Hahaha hahaha ha" and hashtags #karma #lifesabeach #besafe

So Texas was upset that Storey approved of their destruction, for voting for Trump, and touting "karma".  So upset that they approve the same "karma" for Florida with hurricane Irma.  Hypocrite much over there?  The comments that followed in response to this MEME were mixed.  Most were favorable supporting the "Texas Sheriff's Deputies" - and how could they not support their crass and vile position on this?  The MEME itself wasn't heartless and disgusting as much as the words by the admin(s) of the "Texas Sheriff's Deputies" themselves and their response to those of us, mostly me, who disapproved in their actions.

After a few posts, the admin's response was another MEME with "LIGHTEN UP FRANCIS" as well as "Leave the group if you don't like it".  This, of course, spawned more hatred towards myself and others who were equally put-off by the original post.  The admins obviously have very strong, high egos and they were not seeing the situation any other way - they could do no wrong - and their followers and worshipers agreed with them. 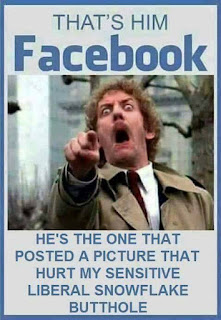 If (former) Professor Storey's posting was wrong and Texas was hurt by it, the admin's post invoked the same feelings towards others and the "Texas Sheriff's Deputies" didn't care.  Whenever you disagree with someone on social media, the only thing they can do to retaliate and attempt to prove superiority over you is call you a "snowflake" and "liberal".  These morons prefer to separate society by classes, color, religion, etc., until a disaster (natural, terrorism, etc) occurs - then it's "let's work together during this crisis so we can provoke hatred towards you afterwards".

...and finally, to show their absolute power over all, and that they were unable to see any wrong-doing of their own: 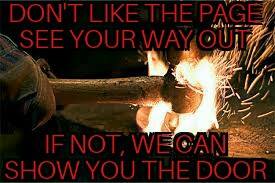 After they posted the pic above, I noticed I was banned from the page.  I'm surprised the admin hatemongers are actually in law enforcement.  My only guess for the ban is that they did realize they were off a bit, used callous judgement in their posts and were wrong, but were too egocentric to admit it to their worshipers.  Instead, they ban people from their page.  Of course, they are the administrators and can do as they please, but they were still wrong, insensitive and had no problem watching the hatred and provoking it themselves to protect their "we're better than you" image.

It's really a shame, too.  I enjoyed the page and (most of) the posts.  I'm from Texas originally.  I respect law enforcement.  But this group changed my opinion about the "Texas Sheriff's Deputies".  I see what they stand for now and what their mindset really is.  Are we going to laugh next time they are in danger?  Do we laugh when they get shot?  When they get arrested for being above the law?  No.  We are bigger than that.  Maybe the admins need to realize they are not the immortal Gods they think they are.  Step off of your high horse.  Try being human, if you can.